Revisited Myth # 58: Niches called ‘coffin corners’ were built into staircases to allow people to carry a casket downstairs and turn the corner. 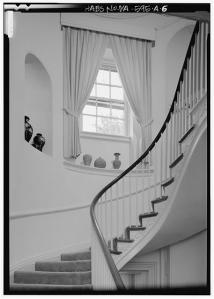 I must admit, this is one of my favorite myths. You’ll hear it in some Victorian-era houses that have architectural niches built into the wall of the staircase landing, as on the left above. The story goes that these niches were called coffin corners. Someone might explain that, because most people died at home in their beds and because most bedrooms were upstairs, it was difficult to get the casket up and down the stairs when the staircase turned a corner. So at the landing, Victorian architects would cut a niche into the wall. The pallbearers would insert one corner of the coffin into the niche and make the turn at the landing.

Part of this is true: people did tend to die at home and the bedrooms of larger homes did tend to be located on the second or third floors. And many Victorian homes do have niches built into the wall of the staircase. But these were for decorative purposes: to display a statue, perhaps a bust, or a vase, or maybe flowers. Why would anyone carry a coffin upstairs to the corpse rather than carry the corpse downstairs to the coffin? Most books about Victorian architecture debunk this myth. For example, John Maass calls it a hoax in The Victorian Home in America (1972).

This entry was posted on Sunday, September 20th, 2015 at 6:55 am and is filed under Architectural Features. You can follow any responses to this entry through the RSS 2.0 feed. You can leave a response, or trackback from your own site.

10 Responses to Revisited Myth # 58: Niches called ‘coffin corners’ were built into staircases to allow people to carry a casket downstairs and turn the corner.