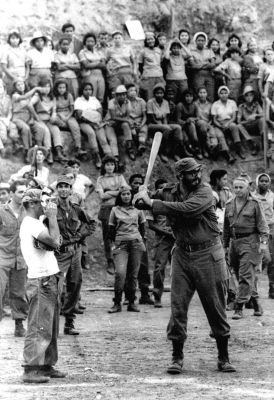 As a young man before the Cuban revolution, Fidel Castro tried out for the New York Yankees, almost making the team.

I believed this! Until I read the debunking on NPR, I thought this was true. Something in the same vein as Hitler having been rejected from art school. An “if only” sort of feeling washes over you as you contemplate the way the world would have gone had Hitler been accepted to art school or if Castro had made the baseball team.

But it’s not true. Adrian Burgos Jr., University of Illinois history professor and author of Playing America’s Game: Baseball, Latinos and the Color Line, says it simply didn’t happen. One way he knows that is because the Yankees didn’t scout in Latin America until the 1960s and the Cuban Revolution began in 1953 and ended in early 1959.

“He didn’t try out for the Yankees,” Burgos tells NPR’s David Greene. It’s possible Castro went to an open tryout held by the Washington Senators in Havana, Burgos says, but he was not “at the level of a talented Cuban ballplayer where the scouts went looking for him.”

Read the entire story here on the NPR site.

This entry was posted on Saturday, December 3rd, 2016 at 10:07 am and is filed under History. You can follow any responses to this entry through the RSS 2.0 feed. You can skip to the end and leave a response. Pinging is currently not allowed.

One Response to Revisited Myth #144: Fidel Castro and the Baseball Tryouts