Revisited Myth #18: Panes of window glass in old buildings are visibly thicker at the bottom, proving that glass is a viscous liquid that has “flowed” over time. 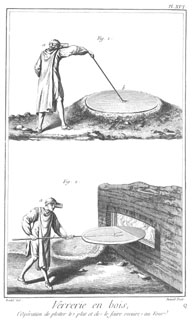 Thank you, Tom Winslow,  a Park Ranger/Education Specialist  at Morristown National Historical Park in New Jersey who submitted this myth, one he hears frequently and tries to debunk whenever he can. The glass flow myth is hard to kill off, as Tom can attest.

Antique glass was made by hand. Craftsmen tried to make each plate of glass evenly flat, but there was often visible variation in the thickness. One early technique involved spinning molten glass to create a round, flat plate. The edges could turn out thicker than the middle. The cooled plate was then cut to fit a windowpane. If one edge was thicker, the installer generally placed that edge down for stability. If you look closely at a piece of antique window glass, you may see an arc, not to mention bubbles or other imperfections, all of which are evidence of hand craftsmanship. 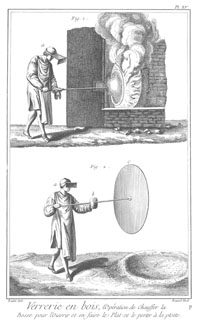 Debunkers make the argument that if glass really did flow visibly over time, we would see more flow in ancient Egyptian glass than we do in, say, colonial American glass. But this is not the case. In 1998, a Brazilian physicist, Dr. Edgar D. Zanotto, wrote an article in the American Journal of Physics relating to the false notion that observations of thick glass on old windows meant that glass is a liquid. He tried to calculate the time required for glass to actually flow and found that at 777° F the glass would move a visible amount in 800 years; yet at room temperature, it would take longer than the age of the universe.

But I’m a historian, not a scientist, so if you really want the technical details, jump into one of these reputable websites: http://www.glassnotes.com/WindowPanes.html, or http://dwb4.unl.edu/Chem/CHEM869A/CHEM869ALinks/www.ualberta.ca/~bderksen/windowpane.html.

Even Wikipedia is trying to squelch this myth! http://en.wikipedia.org/wiki/Glass

This entry was posted on Sunday, June 22nd, 2014 at 6:57 pm and is filed under Architectural Features. You can follow any responses to this entry through the RSS 2.0 feed. You can leave a response, or trackback from your own site.

2 Responses to Revisited Myth #18: Panes of window glass in old buildings are visibly thicker at the bottom, proving that glass is a viscous liquid that has “flowed” over time.