It’s time for Christmas myths again! Here is one of my favorites: 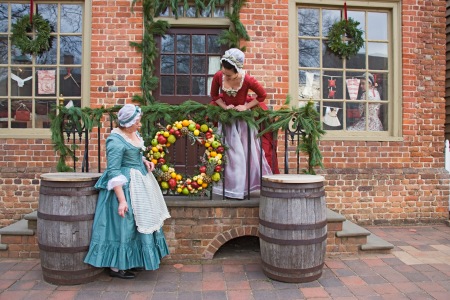 The approaching holidays require a Christmas myth or two . . . so let’s start with the idea that colonial Americans in general celebrated and decorated for Christmas. That’s erroneous. Many early Americans didn’t acknowledge Christmas at all, let alone celebrate or decorate for it. These included the Puritans in New England and various denominations throughout the middle and southern colonies like Amish, Baptists, Congregationalists, Mennonite, Methodist, Presbyterian, and Quakers. But for many in the central and southern colonies, Christmas was a holiday season.

Let’s go to the biggest decorating myth in American Christmas history–the idea that our colonial forebears decked their homes with fruited wreaths.

The idea of decorating the doors with rare fresh fruit where it would hang until it rotted or was eaten by squirrels would have horrified everyone in colonial America, no matter how wealthy they were. Fresh fruit was rare to nonexistent during the winter and if one were fortunate enough to have some imported oranges from the Caribbean or late apples from New England, one ate them.

This myth originated with the DellaRobbia-style decorating that began in Williamsburg in the 1930s (when the town was being restored with Rockefeller money) as a compromise with its residents. As far as we can tell, colonists did not decorate the outside of their houses at all, but Americans in the 1930s most certainly did, and Williamsburg residents were not happy to be told that authenticity demanded they forego all their Christmas decorations. Nor did the Colonial Williamsburg executives relish the thought of blinking colored lights and reindeer glowing from the rooftops of the restored town. It was decided to encourage natural decoration with materials that would have been available to the colonists, such as greenery, dried seed pods, fruit, pinecones, gourds, oyster shells, and so forth. But no matter how often Foundation executives stressed that this was NOT a colonial decorating method but a modern-day compromise, the erroneous impression spread. 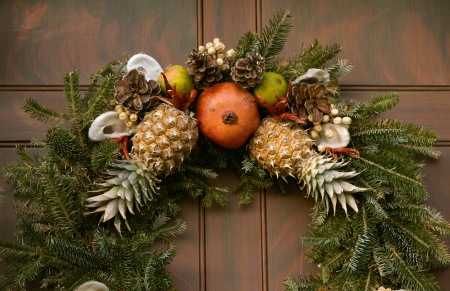 This entry was posted on Friday, November 30th, 2018 at 9:20 am and is filed under Christmas. You can follow any responses to this entry through the RSS 2.0 feed. You can skip to the end and leave a response. Pinging is currently not allowed.